Cellular Agriculture, the UK’s first startup in the cultured protein space, has developed a technology to enable cell-based foods to be produced on an industrial scale. Learn more about their revolutionary idea and how the 2020 EIT Food Accelerator Network supported their journey.

The idea: scaling-up cell-based foods for the masses

The first cultured meat product was sold in December 2020 at a restaurant in Singapore, but production of cultured foods is still niche and small-scale. Yet there is a great need for healthy and sustainable alternative proteins as our population is growing, creating a need for increased protein production. Traditional animal-based proteins have been under scrutiny because of their environment impact, including GHG emissions which contribute to climate change.

Cellular Agriculture support an emerging alternative protein industry to reach industrial scale cultured food production for meat, seafood and milk that delivers on cost, quality and minimal environment damage. They have created an efficient, scaled commercial bioprocess technology platform that provides a path to price parity with traditional animal protein whilst also mitigating its effect on climate. Their ambition is to become the leader in global technology solutions for the cultured meat industry.

Who is behind the idea?

CEO and Co-Founder Illtud Llyr Dunsford and CTO & Co-Founder Dr Marianne Ellis are the creators of this cultured protein startup. Illtud and Marianne met at a conference in the Netherlands in 2015 and decided to work together after realising they had a shared passion for food equality and complementary skills for creating a business with a great chance of success.

With Illtud’s agri-food background which includes coming from a family that have farmed for over 300-years, and previous experience in creating a successful business which won the accolade of the Best Food Producer in the UK, which he could bring to his new venture. In contrast, Marianne’s engineering background which includes commercialising a technology in cell therapies, helped bring skills in fundamental research and product development to establish a proof of concept and to ultimately create their technology.

What are the benefits of cultured meat?

Compared to traditional production of animal proteins, cultured meat and other cultured foods can be produced using less land and less water, conserving finite resources and minimising GHG emissions being released into the atmosphere. While livestock farming is still needed to enrich soils with important nutrients from animal waste, a more holistic approach is needed so that food production feeds a growing population without destroying the planet.

While cell-based is still a niche way of producing food, Cellular Agriculture are creating the technology that will be needed to produce such foods on a large scale, once there is sufficient demand. With climate-conscious consumers already demanding more sustainable foods, this demand is likely to increase over the next few years.

Cellular Agriculture participated in the EIT Food Accelerator Network in 2020 where they gained support in developing their business model and building important connections with corporates. The programme helped Cellular Agriculture to better understand and position their value proposition, so that post-programme they felt confident in the way they pitched their company to others.

The mentorship Cellular Agriculture received during the programme helped them to develop their approach to scaling the business, by considering their long-term vision. This included creating connections with corporates and building key relationships early on, as although large corporates may not be their current customers, they will be in 5-10 years’ time, when demand for industrial cultured meat increases. 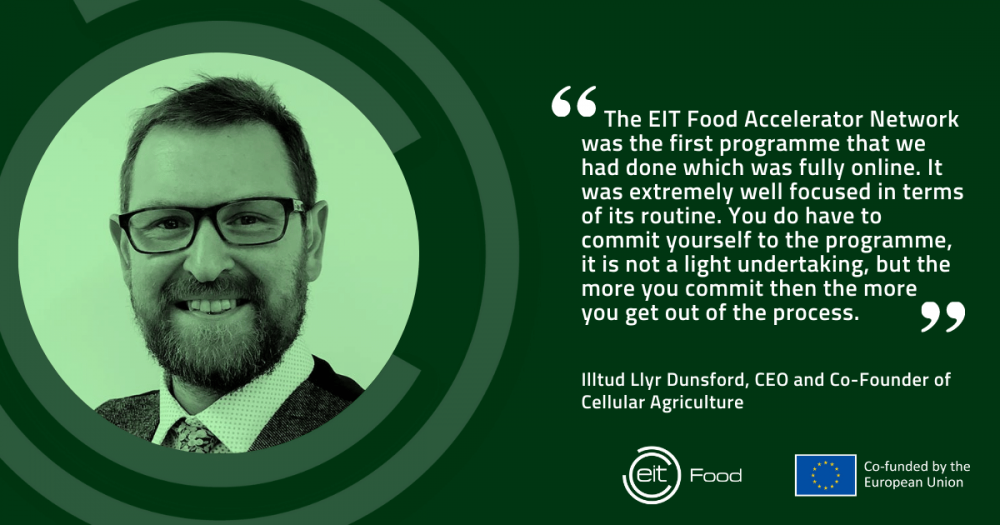 “Having been involved in other accelerators and incubator programmes, there was something quite brave about EIT Food. There’s this sense at the moment that if you’re in food tech or agritech, that the Silicon Valley Model of food as software is the way that you should build your business. But what EIT Food gave us was the realisation and the confidence that actually, we could take a more traditional path and do more consultancy work and engineering work and derive profit that could actually support the business rather than going down the route of raising equity, which would dilute our position as founders. When you’ve worked so hard for something, it was refreshing for me to hear someone saying, ‘you don’t have to do that, there is another way’”, Illtud Dunsford, CEO.

In this video, Co-Founders Illtud and Marianne explain the story behind Cellular Agriculture and how they how to deliver scaled technology for multi species cell-based meat technology.
more close

June 14, 2022
regional news
In order to build a resilient and sustainable agrifood system, we need to work together to understand the challenges and opportunities faced by stakeholders from across the whole food value chain.
Continue reading

Inspiring innovation and collaboration in animal health, aquaculture and agri-tech sectors at A3 Scotland

May 19, 2022
news
EIT Food hosted a session to inspire innovation and collaboration in European aquaculture at the A3 Scotland conference on 26th- 27th of April.
Continue reading