David Barreiro winner of the first EIT Food Journalism Prize, and Pedro del Corral and Alex Fernández Muerza also recognised. The award ceremony was held on the 17th December after a debate about the challenges of communication in relation to the agrifood sector. The Jury recognised “the outstanding level” of all contributions submitted.

On 17 December,  EIT Food South awarded the first Agrifood Innovation and Sustainability Journalism Award to three professionals for their outstanding contribution to disseminating these values in society, as well as fostering good habits and healthy initiatives over the last year. David Barreiro, Chief Editor of the journal Eurocarne, won the award thanks to its work entitled ‘La carne que cambiará el mundo’ (The meat that will change the world), published in December 2018, which focuses on cultured meat produced from stem cells.

The Jury highlighted “the outstanding level of the work submitted” by over fifty journalists in total from specialist and general media, including the press as well as digital and audiovisual media. The overall level was so high that the second prize was split between two winners:

On the one hand, Pedro del Corral, Editor of La Razón newspaper supplement ‘A Tu Salud’ (Good Health), picked up an award for his article on microbiota and on how “freezing intestinal flora will cure illnesses in the near future”. On the other hand, journalist Alex Fernández Muerza also received the second prize for his article ‘Nasti de plastic’, published by the magazine Muy Interesante, delving on the abuse of plastic and waste.

David Barreiro received the first prize consisting of a cash price of €1,000. The Jury focused on “its completeness, the way technological advances are described, the use of very easy to understand language and the fact that it is very well documented”. Moreover, a reference was also made to “the time when the article was written, as it was one of the first ones to deal with this issue”. Likewise, the “outstanding level of the work submitted” was also recognised, and among them, the article ‘Volver a empezar’ (To begin again) also published by Eurocarne, was particularly praised.

The winner has 20 years’ experience in the food sector. He graduated from the Universidad Pontificia de Salamanca with a Bachelor’s Degree in Information Sciences and earned a Master's degree in e-Business at ICAI-ICADE. Furthermore, he also obtained a Script Writing and Audiovisual and Film Direction Diploma at the Madrid Film Institute. In fact, he has a broad background in the fiction genre as a writer, script writer and play writer.

The award given to the two runners-up consisted of €500 each. In Pedro del Corral's article, the Jury praised “the effort made to make such as difficult issue known”, and particularly highlighted the opportunity to describe “the relationship between food and microbiota”. Regarding Alex Fernández Muerza’s feature on the abuse of plastic, the “broad use of data and different sources” was recognised, in addition to being “a red hot topic” which “all citizens must be made aware of”. 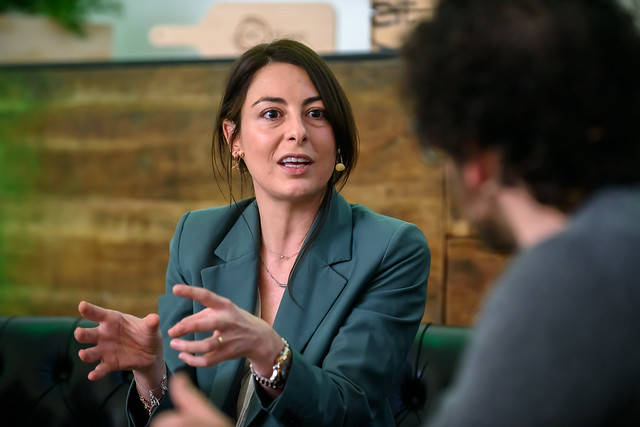 The Jury was made up of four women with proven track record in the agrifood sector and the realm of journalism: Begoña Pérez-Villarreal, Director of EIT Food South; Victoria Moreno, Deputy Vice President for Scientific and Technical Areas at CSIC; Lourdes Zuriaga, President of the Association of AgriFood Journalists of Spain (APAE); and Pilar Salas, journalist of EFE Agency and finalist of the National Gastronomy Awards for the last two years.

These awards aim to promote the work of media professionals in the dissemination of values associated with the realm of agrifood, such as boosting consumers’ confidence, creating healthier food options, improving food sustainability or promoting education to participate, innovate and move forward.

The award ceremony was preceded by a debate entitled ‘Communication in a changing agrifood sector: towards innovation, sustainability and circular economy’, moderated by Daniel Mediavilla, journalist of Materia, the Science section of the newspaper El País. The debate participants included: Elisa Plumed, journalist specialised in agriculture and food; Román Muñoz, Manager of the Business Association of Madrid Food Industries (ASEACAM); and Catalina Trujillo, founder of the start-up Souji.

The event opening was attended by Purificación González Camacho, Deputy Director General of Food Chain Structure, of the Ministry of Agriculture, Fisheries and Food; and Begoña Pérez-Villarreal, Director of EIT Food CLC South.

July 13, 2022
regional news
EIT Food EWA offers its participants training and personalised mentorship with a business expert, as well as access to funding opportunities of up to €10,000
Continue reading

June 30, 2022
regional news
Phenoils consortium and EPS in particular are looking for an italian industrial oil mill to carry out an industrial trial during the season 2022-2023 at industrial scale for testing ultrasounds and ultrasound combined with pulsed electric…
Continue reading