Organized by the Digital Innovation Hub "AgriFood Lithuania DIH" and the European Union's leading food innovation initiative "EIT Food", the conference Digital Sea 2021 was the first event of this level and depth focusing on the challenges and digital opportunities at sea in the context of twin transition.

Organized by the Digital Innovation Hub "AgriFood Lithuania DIH" and the European Union's leading food innovation initiative "EIT Food", the conference was the first event of this level and depth focusing on the challenges and digital opportunities at sea in the context of twin transition. The blue economy, its digitalization, "green" effects and sustainability have brought together a particularly wide range of leaders from cross-sectoral political, business, scientific and social organizations to speak, listen and seek common ground. As many as three ministries - the Ministry of the Environment; Transport and Communications; Energy - strategic state-owned enterprises, agencies and market-leading businesses took an active part in the conference.

At the beginning of the conference - the kick-off of "EDIH Lithuania.lt"

At the end of last year, a consortium has been established by eight leaders from different sectors in Lithuania. During the competition, it was recognized as the best and most in line with Lithuania's interests in providing digital transformation services to business entities in the Central and Western Lithuania region and was nominated by the Ministry of Economics and Innovation to the European Commission to become the European Digital Innovation Hub. During the conference, the official start of "EDIH Lithuania.lt" took place.

“This is proof that organizations with different goals, which are selfish in nature, understand the meaning of working together. By working and collaborating together rather than competing internally, we can achieve much bigger and faster results. I have no doubt that the members of this EDIH will become a cohesive team and will help to implement digital solutions in Lithuania efficiently and quickly,” - said Augustas Alešiūnas, one of the founders of this Hub, founder and CEO of the agri-food digital technology company "ART21".

The Minister of Environment focuses on new business models

According to the Minister, the Baltic Sea is special in that it is very shallow, the water in it is renewed only every thirty years, therefore a drop of diesel falling from a yacht or a motor boat floats in the ecosystem for so long that it can deprive a lot of wildlife opportunities. And if we do not reduce phosphate and nitrate emissions into the Baltic Sea, the prospect is that the decision to ban salmon and sea trout fishing on the Baltic coast may soon be taken together with the Minister for Agriculture. Few know that cod fishing has been banned in the past. "These are symptoms that show that we are not living according to our capabilities and that we are depriving our children of the opportunity to eat fish from the Baltic Sea," said Minister Simonas Gentvilas at the Digital Sea conference.

An inspiring example is the European Union's plan to extend pollution permits to the maritime and road sectors. According to the Minister, this makes it possible to predict a significant change in the logistics sector, as companies will be able to quickly switch to clean technologies and thus save the number of emission allowances, which they can later sell and earn extra from it. According to Simonas Gentvilas, this is a turning point that Lithuanian companies should be wide awake for.

The speakers who took part in the discussion agreed unanimously that having a green port in Klaipeda is realistic by the end of this decade, but it is necessary to clearly define in society how it understands the green port and what indicators should be used to measure it. This is necessary in order to have a common understanding and not to lead to unnecessary discussions simply because of different visions. According to Vidmantas Paukštė, Infrastructure Director of Klaipeda State Seaport Authority, the port is determined to follow a sustainable and harmonious course, which would have zero emissions and be green in the future. 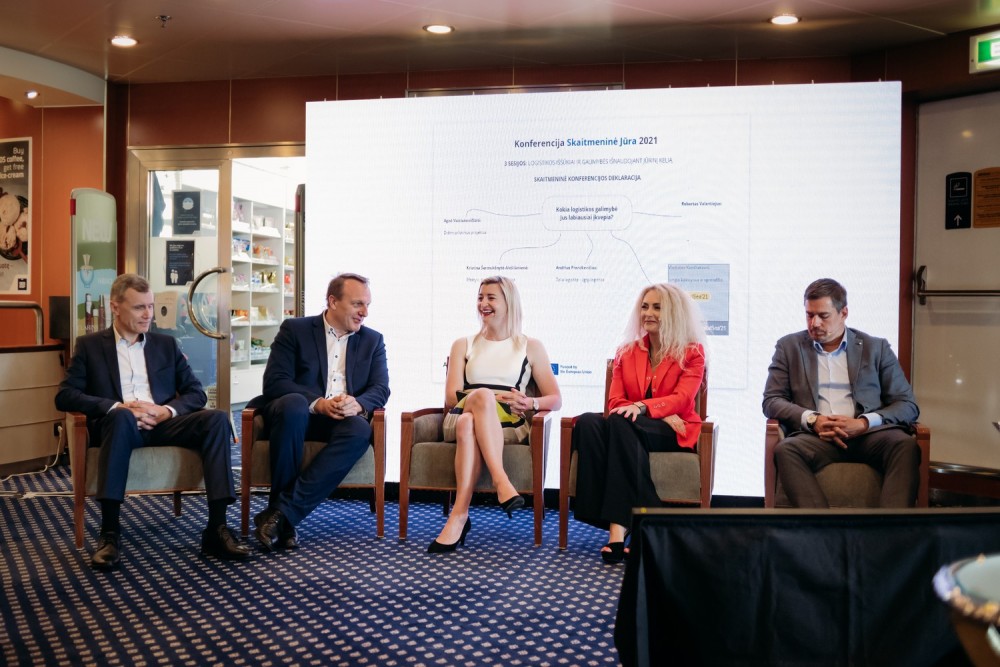 The importance of aquaculture production is growing

The panel, organized by "EIT Food", the European Union's leading food innovation initiative, focused on the challenges and benefits of sustainable aquaculture. While giving the speech, Jouni Vielma, lead researcher at the Finnish Institute of Natural Resources (Luke), emphasized the importance of technology that will open up opportunities to increase the sustainability of aquaculture. He pointed out that digital solutions are important in all value chains from manufacturing or processing to retail. According to discussion moderator Mercedes Groba, "EIT Food" strives to contribute to sustainable aquaculture through innovation, education, business creation and communication.

Experts have argued that it is not the speed of research and innovation that is a problem holding back progress. According to them, the biggest challenges are legal and administrative barriers that block the rapid development of innovation, because at the research level, everything is going great. Unless there is a mismatch between science and business, as sometimes researchers move too far away from the daily routine on farms. It was also emphasized that sustainable aquaculture requires the cooperation of all stakeholders and that educating consumers about healthier and more sustainable foods and not relying solely on information on social media is essential.

In addition, the discussion highlighted the consensus among experts that the importance of large global technology companies in the food sector is growing. And while the salmon industry is the engine of aquaculture technology, solutions are also needed that encourage the development of advanced solutions into other areas of aquaculture.

The future of logistics is a unified network, digitalization and progress

Convenient connections, friendly environment and high return - such a future was outlined by the Deputy Minister of Transport and Communications Agnė Vaiciukevičiūtė for Lithuanian logistics. According to her, the green agenda and digitization are the areas that will receive special attention from the government.

Andrius Pranckevičius, Deputy Chairman of the Board of "Linas Agro Group" has offered a thought that he would be most inspired by a sustainable and green long chain from the production to the final person consuming the product in any part of the world. According to Kristina Šermukšnytė-Alešiūnienė, Director of the Digital Innovation Hub “AgriFood Lithuania DIH”, the state must actively contribute to the transformation of sectors. According to the digitalization expert, Lithuania, as a small country, should take advantage of this and try out the possibilities of integrated logistics, connected into one efficient system in different sectors. 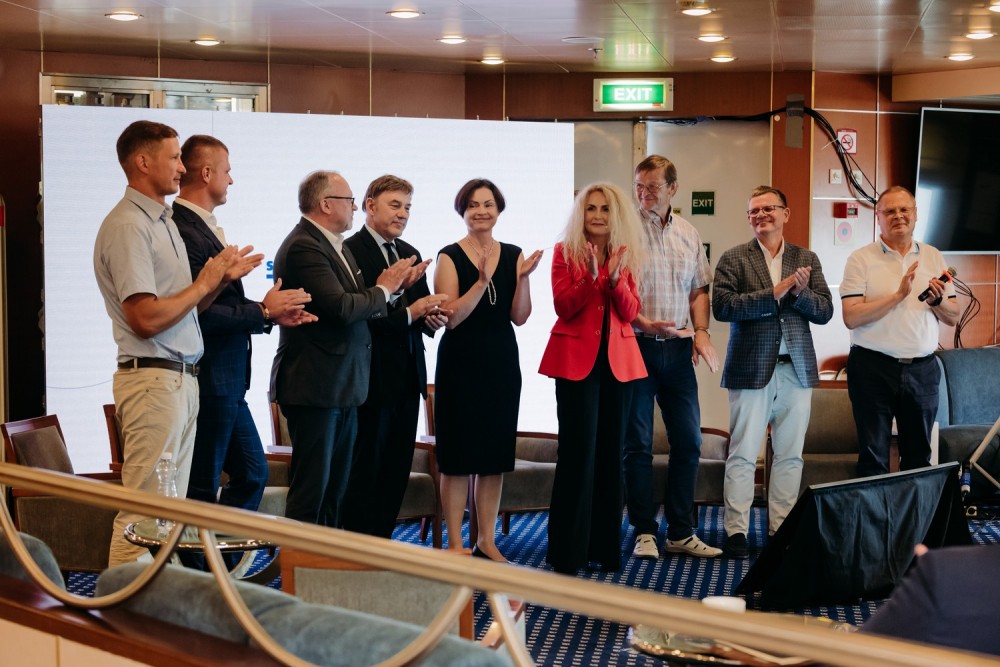 Daina Kleponė, General Manager of "Versli Lietuva", said that the biggest breakthrough always comes from the state, which determines a certain direction and needs. According to her, there are many examples related to the U.S. military. "About seventy percent of the technologies created by innovators do not stick, because it turns out that no one needs them. Digital innovation hubs should play an important role in the innovation ecosystem, so that they, just like a pharmacist, could choose the most suitable digitization methods for individual companies or sectors,” - spoke Augustas Alešiūnas, the CEO of "ART21", at the conference discussion.

"There is no need to fear unsuccessful investments. If we have ten of them, it is likely that nine will burn, but the lucky one will buy them all back and create added value. However, if we want to have strong innovators, the state needs a long-term vision for innovation, which would not be limited to short-term incentives.” - the thought was shared by Acting Lithuanian energy agency director Virgilijus Poderys.

Energy is going through a turning point

Deputy Minister of Energy Daiva Garbaliauskaitė presented Lithuania's future goals in maritime energy, where the Ministry sees great untapped potential and an opportunity for our country to secure energy independence. It is planned to develop two offshore energy parks with a capacity of up to 1,400 megawatts by the end of the decade. The parks themselves are planned to be 30-40 km from the shore, and expert calculations show that the Baltic Sea is one of the most attractive European seas for developing wind energy due to the prevailing winds, with a potential of more than 3 gigawatts in Lithuania.

Aleksandr Spiridonov, CEO of "Ignitis Renewables", who took part in the discussion, said that the contribution of marine energy would quadruple in less than ten years and, according to him, this is a great opportunity for Lithuania to become an electricity exporter. In addition, wind technology itself has halved in price in five years, so there is no need to worry about the potential high prices of offshore wind energy (as it once was). Rokas Pečiulaitis, the founder and CEO of "Contrarian Ventures", was sure that the next century would be an electron century with flexible electricity prices dominating in the market. In addition, the venture capital fund manager said shipping is the sixth largest polluter in the world after Germany. Electrification of shipping, which will significantly save fuel and even maintenance costs, will have to happen.

July 15, 2022
regional news
In Europe, women entrepreneurs make up only a third of the self-employed people. Unfortunately, in the agrifood sector this figure is even lower. This situation has inspired EIT Food to launch a five-month international EWA program, which…
Continue reading

July 13, 2022
regional news
EIT Food EWA offers its participants training and personalised mentorship with a business expert, as well as access to funding opportunities of up to €10,000
Continue reading

July 10, 2022
regional news
Two years ago, AgriFood Lithuania DIH, which acts as the EIT Food Hub in Lithuania, together with its cross-sectoral partners, established the consortium EDIH Lithuania.lt, which has the most expertise in the agrifood, industrial and…
Continue reading