Across the world, farmers are putting regenerative practices into place. From developing agrifood startups to large scale farms, farming for a better climate is proving to yield positive results. 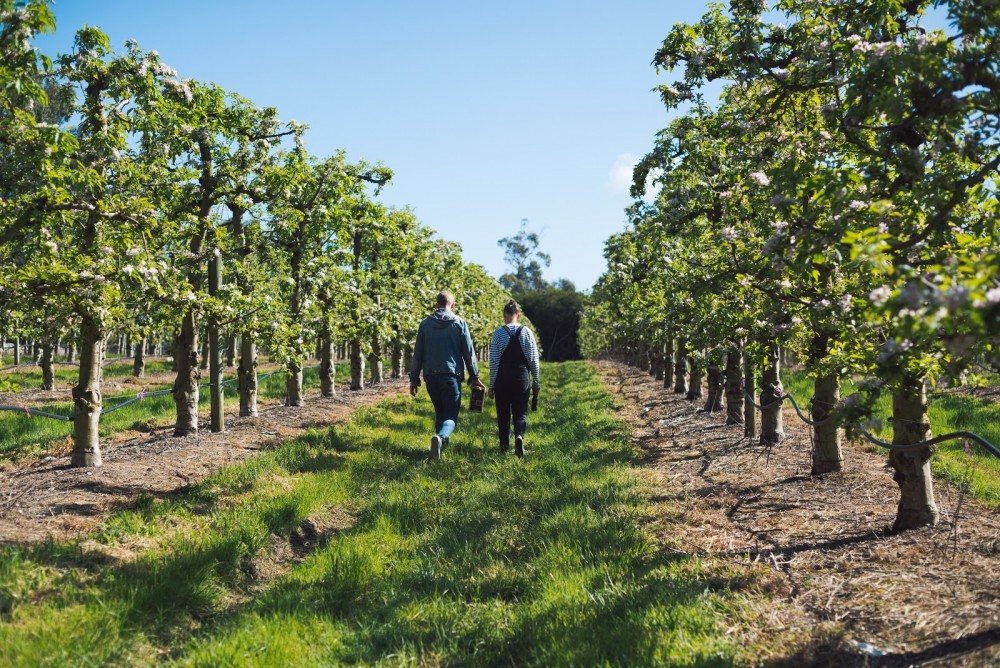 Having to adapt has become the norm for many farmers across the world. Changes to weather patterns, climate unpredictability and the need to protect our natural environment, alongside the fact there could be 9.8 billion people to feed by 2050 (1), means that farmers are now looking for ways to sustainably secure the future of farming.

Regenerative agriculture helps to enhance the resiliency of farms, boosting sustainability and biodiversity in the process. It takes a holistic approach to farming that considers the entire ecosystem, compared to industrial farming which is more about scheduling inputs and outputs to attain short-term goals. More than a grower of crops, the regenerative farmer is a “steward of the land,” as Spanish farmer Alfonso Chico de Guzman explains. The type of crop is secondary, he says, with soil health the most important consideration.

While regenerative farmers may have lower yields in the short-term, regenerative practices foster healthier soils, improved water infiltration and reduced soil erosion and have been recorded to sustain yields and/or lead to reduced production costs (2).

1. The future of agriculture: General Mills, US

General Mills is a US-based food company that has committed to deploying regenerative agriculture methods across one million acres of farmland by 2030. Driven by the notion of moving beyond just ‘sustaining our planet’, General Mills measures the impact of regenerative agriculture across five goals: economic resiliency, soil health, water use, biodiversity and animal health and wellbeing (3).

With these in mind, General Mills has launched a series of pilots to observe how regenerative farming works in practice. Understanding that each farm and farmer will have different priorities and limitations, General Mills studies regenerative farms alongside those using conventional methods. This aims to explore the benefits of regenerative practices and demonstrate that farms do not necessarily need to use conventional methods to produce the highest yields.

The pilot programmes also consist of education workshops, technical support and collective research, as well as access to the General Mills Regenerative Agriculture Self-Assessment tool. This is designed to help farmers understand how their own practices align with recognised principles of regenerative agriculture, allowing scope for change and improvement.

With the average age of farmers in the US and other developed countries sitting at 60 years old (4), General Mills suggests there is a need to ‘cultivate the next generation’ by bringing farmers together and providing resources to those who will ultimately be shaping the future of agriculture.

To do this, the food company supports the National Young Farmers Coalition, a not for profit advocacy group fighting to change policy, build networks and provide business services for young farmers. However, inspiring enough of the younger generation to move into farming remains an ongoing challenge.

On the other end of the size spectrum, but with the same values at its core, is Bec-Hellouin in Normandy, France (5) – a farm ‘reinventing agriculture’. Charles Hervé-Gruyer is the co-founder of the small farm which is structured around the concept of permaculture - a set of design principles centered on whole systems thinking which directly uses the resilient features observed in natural ecosystems.

The farm is designed to be a ‘mini-forest garden’ where all plants coexist and thrive. It has a tiered system with a dedicated canopy, intermediary shrub layer and ground cover which aims to mimic the ecosystem of a forest, allowing wildlife to live alongside growing food.

The idea is that multi-cropping and randomised planting allows for diversity in soil nutrients and promotes all-round healthy growth, with the benefit of natural fertiliser from animals. Charles compares his farming method to hunter-gathering, where there is a reduced need to till and plough the soil, minimising disruption. 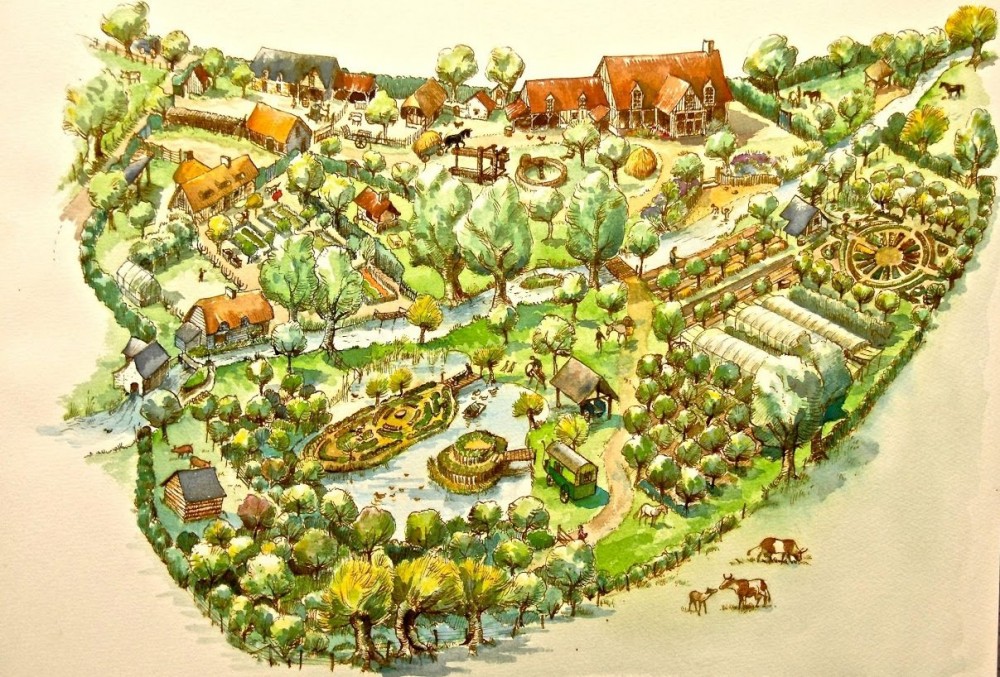 The results? Charles says that the forest garden has actually exceeded expectations in terms of productivity. Bec-Hellouin has around 1.8 hectares of land and produces approximately 800 varieties of vegetables, fruit and herbs (6). Although results were not immediate, he describes now having freedom as a farmer with fewer constraints than a conventional farm which requires constant investment and attention. In fact, an economic viability study carried out between 2011 and 2015 by the French National Institute for Agricultural Research (INRA) concluded that the work on the farm ‘could be easily equivalent or superior to that obtained in a classic farm’.

“Nature will always go toward more complex systems, while modern agriculture does the exact opposite. It makes things artificial and simplifies the agrosystems. We, on the other hand, try to bring together trees, animals and cultivated plants and this complexity allows the ecosystem to do its work which means that we intervene less and less,” Charles said.

Partnering with Microsoft and Danone (7), EIT Food has been working to accelerate agrifood startups specialising in artificial intelligence (AI). Alongside other key focus areas, the AI Factory for Agrifood aims to encourage the progression of regenerative agriculture through digitalisation.

Partnering with EIT Food and Microsoft, Danone hopes to support the selected startups to develop a series of skills and services so that regenerative agriculture can become optimised, simplified and ingrained into farmers’ day-to-day activities. 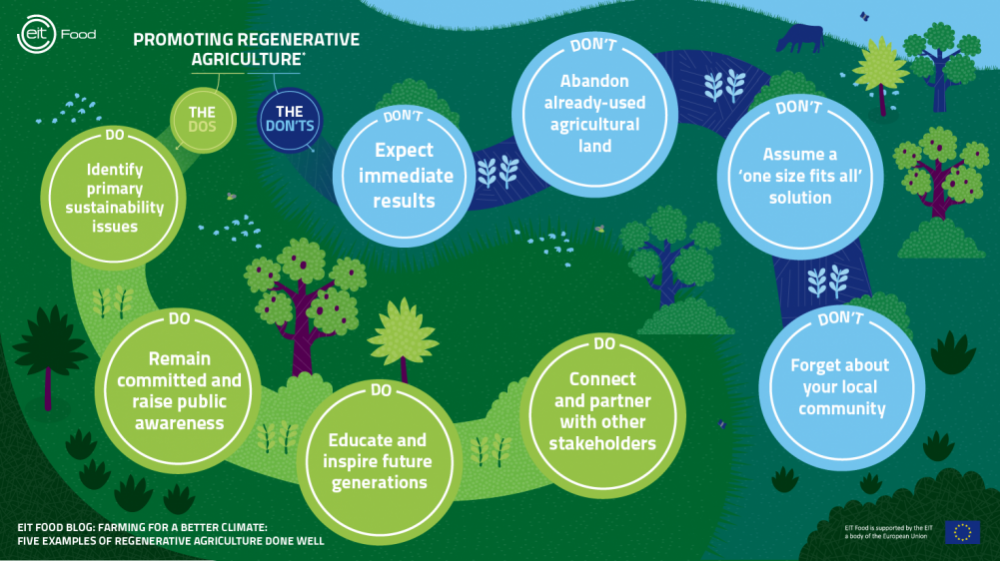 Ridgedale Farm AB, a local food producer and educational site in Sweden, is also working to ‘facilitate the next generation of entrepreneurial young farmers’.

The farm, alongside its crop and livestock operations, offers focused learning experiences about farm-scale permaculture design, regenerative agriculture, agroforestry, pasture-based livestock enterprises, as well as how to operate your own on-farm poultry processing facility.

It works on the premise that its primary responsibility is to regenerate the landscape, ecosystem processes and soils, with the need to educate, facilitate, inform and empower people into action as its secondary function.

Students from 45 countries take part in intensive programmes during the summer about regenerative practices such as holistic management, water distribution and tree planting. They are given access to high quality laser mapping equipment and other digital tools and perform ongoing monitoring tests in order to track the progress and impact of regenerative farming.

To be able to move animals around as they would in natural systems, simple water networks using fresh forage from local mountain streams are created across the farm. At a low cost, this keeps them hygienic with access to fresh water.

Ridgedale is at 59°N - the same latitude as Magadan in Russia and Yukon in Canada - and has approximately 120 frost-free days per year. Faced by this extreme climate, the farm seeks to act as an example that sustainable, profitable land-use systems are “possible anywhere on the planet.”

Following his graduation as an Agronomist Engineer in Brazil, Leontino Balbo Junior joined his family sugarcane business in 1986. After realising that the traditional methods being used did not consider soil health and long-term resilience, he decided to pursue new harvesting and processing methods and created the Balbo Group (9).

Alongside using alternative fertilisers and pesticides, Leontino created a machine to cut cane and return 20 tonnes of previously unused organic material per hectare to the soil each year. This material then restores nutrients and prevents water evaporation from the soil.

To address problems of soil compression by conventional equipment, high flotation tyres were also adopted, which are partially deflated before vehicles are driven into the fields, reducing soil erosion and damage.

Farmworkers were trained, and local community members were invited to attend demonstrations to learn about regenerative practices so that their story and learnings could be shared.

Results were not immediate, and Leontino stressed that patience and commitment to the vision were key to the success of the project - which now exports sugar cane to 64 countries. He said "At Native [the Balbo Group’s agricultural brand], our production system now achieves 20% higher productivity than conventional sugarcane production, with genuine concern for environmental, social, and economic factors (9).”

How can you get involved?

EIT Food is offering a free programme of support to help farmers transition to regenerative agriculture. Training sessions will be held in Spain and Italy from September through October 2020 and will be continued in 2021. Discover how you can take part here.

Matt is joined by EIT Food’s Strategic Relationship Manager, Barbaros Corekoglu, to celebrate the small business entrepreneurs who are transforming their food systems for a better tomorrow. These innovators are all winners of the recent UN Food Systems Summit ‘Good Food For All’ competition. In part 1,...