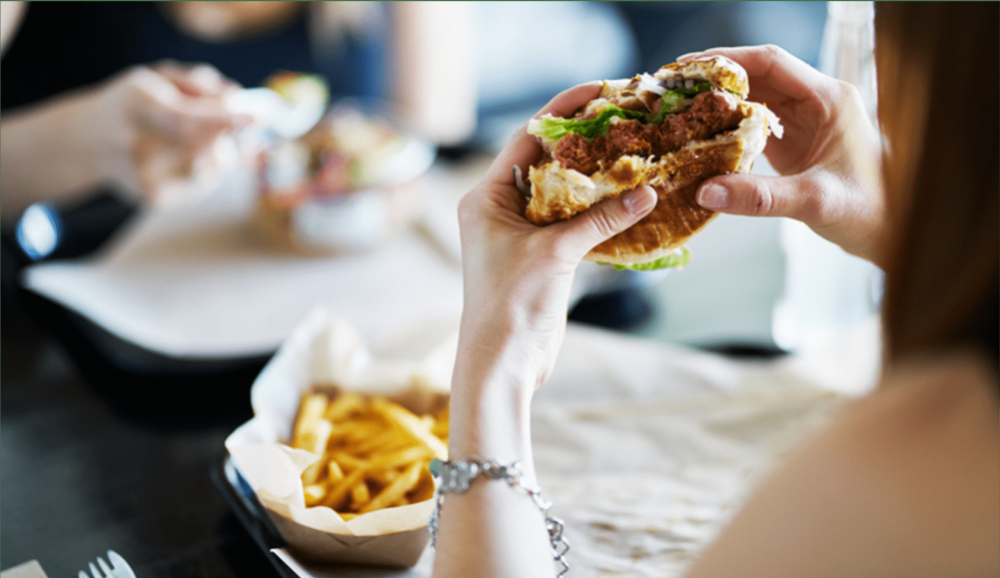 Alternative proteins are vital for the future of food. The European Commission’s Farm to Fork Strategy has identified them as key to the transition to a sustainable food system (1) and, despite being on the market for hundreds of years, their popularity continues to grow. This is matched by investment in alternative protein companies which has risen sharply in recent years. Almost $6 billion has been raised by these companies in the past decade (2010–2020), more than half of which was during 2020 alone (2). But with the rate of malnutrition and obesity continuing to pose a serious challenge to human health, are they good for us as well as the planet?

For alternative proteins to become part of our everyday diet, the nutritional advantages and disadvantages of meat must be considered. Meat is a good source of protein, vitamins and minerals. And when eaten according to recommended guidelines, it can form an important part of a balanced diet (3).

However, meat can also be high in saturated fat which can cause high cholesterol levels. It has also been linked to cancer if over consumed. On top of this, if not properly stored, prepared and cooked, meat can cause serious illness (3).

Despite protein being necessary for bodily functions (4), people sometimes eat up to 25% more than is needed (5). That’s according to Roberta Iley, a Principal Change Designer at Forum for the Future. On an episode of the Food Fight podcast, Roberta said that creating healthy alternative proteins “is all about finding the balance” (5).

Roberta explained “we need a food system in the future that provides us with protein in a sustainable, healthy way. For many people around the world there really isn't a choice. Some livestock options, for example, provide valuable opportunities for people to get their protein nutrition.” (5) Reiterating that accessibility is as much a challenge as health and sustainability, she said it is often easy to view something novel and exciting and only consider the immediate benefits. We need to "challenge ourselves", Roberta said, to ensure all aspects of alternative proteins have been considered before they become part of the everyday. (5)

To understand more, we have analysed the health pros and cons of four of the most rapidly growing alternative protein markets: 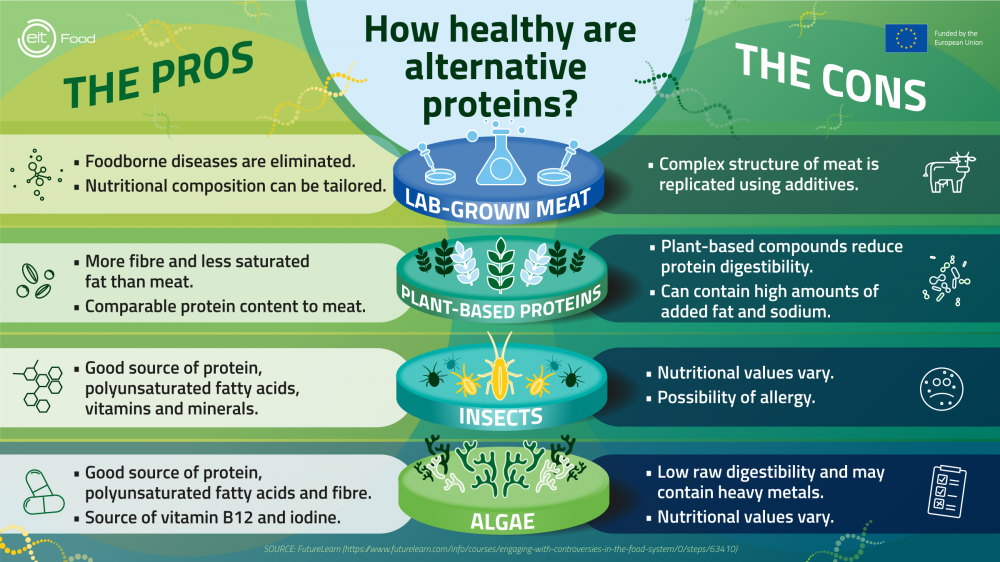 Famous for its sustainability benefits and elimination of animal slaughter, lab-grown meat is on the rise. It is predicted to become one of the largest alternative protein markets globally. $189 million was raised by lab-grown meat companies in the first quarter of 2020 - more than the amount invested in the industry’s entire history! (6). In 2021, the lab-grown beef company Mosa Meat, a member of the EIT Food RisingFoodStar Association, attracted investment of $85 million alone.

With clear interest in the market, the industry is evidently innovating at a rapid pace. Companies are developing everything from lab-grown chicken to lab-grown salmon and their portfolios continue to grow. But how does lab-grown meat fare when it comes to health and nutrition?

The primary benefit is that the nutritional profile of lab-grown meat can be tailored and personalised (7). This means that products could be designed to be low in saturated fat and targeted at those with high cholesterol, for example. Lab-grown meat is also created under sterile lab conditions, reducing the risk of foodborne illness almost entirely (7).

However, lab-grown meat is still in the early stages of development (8). Regulation is still under consideration by organisations and authorities across the world and we are yet to see approved products in Europe.

The consumption of plant-based proteins is increasing at an annual rate of 7% globally (9). The most common protein-rich plants are soybean, legumes and oilseeds. Consumed in their raw state, protein-rich plants have comparable protein content to meat. They also usually contain more fibre and less saturated fat (7). However, when processed to form meat alternative products, such as plant-based burgers, do their health benefits suffer?

In order to mimic the taste, appearance and texture of meat, plant-based products are sometimes highly processed. This is often with high amounts of saturated fat and sodium (10).  Some plant-based burger products can contain as much as 20% more sodium and 25% more saturated fat than beef (10). Additives such as gums, stabilisers and agents are also often needed. These replicate the natural water‑binding and fat‑binding properties of meat (11). This is potentially at the expense of being additive-free.

However, companies such as EIT Food RisingFoodStar Novameat are using technologies such as 3D printing to tailor plant-based meat substitutes even further. The Founder, Giuseppe Scionti, said that Novameat’s plant-based alternatives do not contain the usual cholesterol, hormones or antibiotics found in meat. He also suggested there is potential to add beneficial ingredients such as omega-3 fatty acids in the future (12).

Other EIT Food startups such as Walding are creating meat substitutes directly from plant-based sources like fungi. Walding produces natural vegan ‘chicken’ products with meat-like fibrous structures. The products also have high levels of protein and vitamin D, without the need for artificial ingredients.

Insects, which are already widely consumed across large parts of Asia, Africa and Latin America (13), are also starting to enter the global market. They are an abundant, sustainable protein source and have even been labelled as a potential partial solution to the worldwide food crisis (13). But are they healthy and nutritionally valuable?

Insects are good sources of protein and fat and contain all of the essential amino acids needed for good human health (7). They are also rich in polyunsaturated fatty acids, vitamins and minerals (7).

However, insects can also contain chitin which reduces protein digestibility and they can pose the risk of allergy (7). Their nutritional value can vary depending on the species, developmental stage and type of feed (7). It is still also largely unknown how processing and cooking techniques can affect their nutritional value (7).

Startups and scaleups within the EIT Food network are working to make edible insects the norm. For example, Essento creates products such as insect protein bars and burgers for retail, food services and online sales. Essento also organises cooking classes and team events to raise consumer awareness about the benefits of insects for people and the planet. Hear more about some of the other insect startups in the EIT Food network and their views of insects as alternative proteins here:

Algae is another alternative protein attracting attention as a promising sustainable meat and/or fish substitute. The nutritional benefits of fish, such as essential omega-3 fatty acids and protein, often come directly from their consumption of marine algae (14). So, why not consume algae directly?

Algae can be sold whole or as gel capsules, powder or extract. It is one of the few vegetable sources of vitamin B12 and iodine (7). Algae is also rich in bioactive peptides and antioxidants (7). This can improve biological defences in the body against inflammatory diseases (12).

However, the nutritional value of algae varies depending on the species, growth conditions, harvest location and season (7). This means that understanding these products will be crucial if they were to act as a meat or fish alternative. There are also concerns that algae can contain heavy metals (7). What’s more, there is the challenge of analysing how processes influence the way in which food constituents from algae are released. This can range from food preparation to processes in the gut microbiome (15).

There is also ongoing research about the benefits of algae and microalgae, which could result in it being labelled as a “superfood”. Researchers are growing algae in labs and have found that it can be manipulated to become nutrient-rich (16). Could this increase the chances of algae becoming part of the everyday human diet in the not-too-distant future?

In order to sustain our food system, there is no question that we must change the way we eat. Incorporating alternative proteins into our diets might be one way to do this, but we must not sacrifice our health in the process. It is vital that the agrifood industry comes together to continue research and innovation. We must ensure that health is a key priority when increasing the amount of alternative proteins in our diet.

It is also important to transparently raise awareness about the advantages and disadvantages of meat alternatives. This will allow consumers to make informed decisions about incorporating them into their diets. Take a look at this free EIT Food online course where alternative proteins take centre stage.

Spotlight: Better Nature on the potential of tempeh

Christopher Kong, Co-Founder and Head of Business Development at Better Nature, highlights how they are leveraging an ancient fermentation process to create a minimally processed, protein and fibre rich meat-free alternative, without compromising the taste.

With consumers demanding more from the food system to support their health and wellbeing, innovation in targeted nutrition is continuing to grow and evolve. Here we have spotlighted 5 promising food tech innovations in Europe.

How can we all fight childhood obesity?

In the past 40 years, childhood obesity has become one of our most serious public health challenges, and a recognised problem in every country in the world.