Feeding the World and the Role of Vertical Farming

In 2017, the United Nations (UN) Department of Economic and Social Affairs reviewed global demographic trends and concluded a forecast of the world population to reach 9.8 billion in 2050. The outlook on an increase in population of approximately 2.2 billion in 13 years has, together with sustainability concerns on our global food system, opened up many discussions on food security. Food security is defined as a state “when all people, at all times, have physical, social and economic access to sufficient, safe and nutritious food which meets their dietary needs and food preferences for an active and healthy life” (FAO, 1996). In this context, the prevalent food system, criticized for its damaging impact on the environment and high energy consumption, is increasingly put into question for being capable of addressing contemporary challenges of climate change and population growth.

Therefore, policy makers, companies and research institutions engage with the question of ‘how we will feed the world of 9 billion in 2050’. Dickson Despommier, often described as the vanguard of vertical farming, also incorporated the subtitle “Feeding the World in the 21st Century” to his book  “The Vertical Farm”. He puts vertical farming right in the midst of global discussions on food security. By providing an alternative for local food production, eliminating the need for pesticides, water-saving growing techniques etc. (see our blog post “Is vertical farming really sustainable?“), vertical farming indeed seems to address several challenges that agriculture is facing nowadays. Nevertheless, in order for vertical farming to really contribute to the food security issue, we need to take a closer look at what this ‘problem’ actually means.

In 2006, the Food and Agriculture Organization (FAO) published a study which found that an increase in food production of 100% would be necessary to meet the dietary needs of the world population in 2050 (FAO 2006). Even though the FAO study was more of a theoretical calculation that did not consider important practical aspects, many policy-making institutions and corporate bodies interpreted the doubling of food production as imperative goal for the future. For example, the Royal Society in the UK promoted programs of so-called ‘sustainable intensification’, i.e. the optimization of existing food production efficiency, to augment food supply. However, simply providing more food through the same structures that we have today would most probably not solve the issue of hunger, but even has the potential to aggravate environmental effects of the agricultural system. Here are some reasons why:

Dietary shift towards meat-based products: The FAO study concluded a 100% increase of food production in US Dollars, not actual food in kg or pounds. At the same time, dietary trends show a shift from staple foods to costlier, meat-based products. Therefore, we can see that while food value in US Dollars is expected to double in coming decades, it is not to be equated with a doubling of food supply in weight or volume.

The issue of distribution: More importantly, the doubling figure refers solely to the supply side, thereby neglecting that there are regions which need more food, and regions which already have too much. There exists a paradox between hunger and malnutrition, especially in [so-called] developing countries, and diet-related illness and obesity in more wealthy, industrialized regions. Maybe we should not think so much of producing more food in general, but how we can redistribute food and make it available for those who are really in need of it.

One could say that the widely discussed global food security problem certainly consists of very diverse local problems. Each region might have their own struggle to achieve food security; be it with access to healthy foods, foods they prefer or sufficient food at all - all of which comes to define food security. Acknowledging the diversity of the problem(s), how can vertical farming be part of the solution?

As we are dealing with local issues, it is naturally most important to pay close attention to the local needs and conditions. Vertical farming is still in an early stage, where many different forms are emerging and the concept develops a broad spectrum of definitions. And that’s a good thing! So, whether a region is lacking in fresh vegetables or available food in general - if applied creatively and adapted to local circumstances, the vertical farming technology has the potential to help filling this gap, if done in an environmentally sustainable way (e.g. with less than more energy consumption than regular plant-based food production). However, this might be easier said than done. Can the addressed community even financially afford the technology? How do they currently source their food, and what can be learned from that? Are they even willing to eat vegetables grown under artificial light? These questions, and many more, are decisive if vertical farming will eventually gain wide traction and be able to contribute to food security.

Finally, it is important to say that we should not think of vertical farming as a closed ‘black box’ solution, standardized and clearly defined in its characteristics, but as an open concept that can be proactively formed by the communities (including local engineers, scientists, urban planners, consumers, etc.) where it is located. Only in this way, we can acknowledge the locality of food security problems and respect situated cultural backgrounds of communities. Keeping this in mind, we might see vertical farms in the future that provide sustainable food, re-encourage local food production, and bring people closer to food not only in geographic terms, but also by reestablishing social links between food producers and consumers. 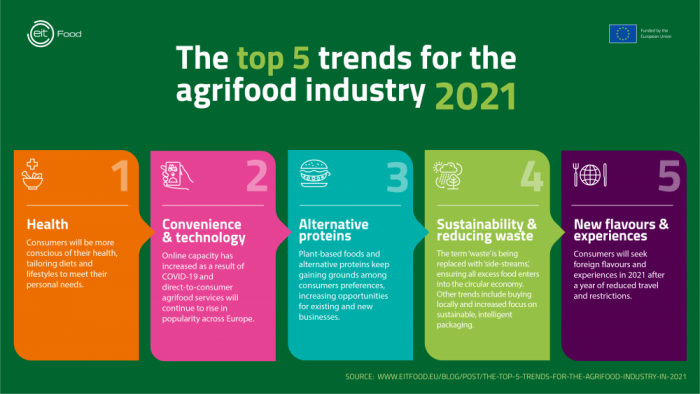 The top 5 trends for the agrifood industry in 2021

After a year of change like no other in 2020, EIT Food has combined expert insights and analysis to highlight the top 5 trends for the agrifood industry in 2021...