Preservation Culture was formed in 2019 with an important purpose – to support women who are often excluded from the workforce while tackling the food waste crisis. We share their story to inspire women to pursue their agrifood business ventures and contribute to transforming our food systems.

What is the mission?

The Co-Founders of Preservation Culture, Rabeea and Angela, were shocked at the amount of food being thrown away in supermarkets, restaurants and households, as this contrasted with their Pakistani and Peruvian cultures which taught them to preserve food as much as possible. While food waste is apparent across the food value chain, they decided to focus their efforts on household food waste, where UK households waste over 7 million tonnes of food each year.

However, tackling food waste was not their only mission. Rabeea and Angela also wanted to support ethnic-minority women living in London, who were often excluded from the workforce and with limited access to flexible employment opportunities. While hosting workshops with local women in London, Rabeea and Angela were inspired by the amazing culinary skills of these women and their knowledge of methods of food preservation.

From then on, they decided to combine their ambitions to provide employment opportunities for women while addressing the food waste crisis. They formed Preservation Culture – training women from local communities who are excluded from the workforce due to lack of flexible employment opportunities, to teach them important communication and facilitation skills, and provide them with the necessary food-certifications to be able to deliver workshops sharing their cultural food practices and recipes.

After developing a business model and prototyping their workshops with local community groups in London, Preservation Culture applied to the EIT Food Change Makers Programme, which empowers diverse communities to transform our food system. The programme enabled Preservation Culture to refine and pitch their ideas in front of a selection panel of industry experts and they went on to win the award for follow-on funding in the final round. Through the funding offered by the programme, Preservation Culture were able to test their workshop model, train women from local communities and hire them to deliver workshops. Co-Founder Rabeea Arif explains further,

“The EIT Food Change Makers programme has been instrumental in our start-up’s journey. The programme was extremely beneficial in developing our idea into a real-time business, pitching it to experts from the industry and gaining practical feedback, as well as finding partners (we were able to find our co-founder, Magdalena who had travelled all the way from Austria to the UK to attend the programme!).

The network of facilitators, food industry experts, and fellow social entrepreneurs provided excellent resources beyond the programme and the connections forged are useful long term. It’s safe to say that if it weren’t for EIT Food’s support and the seed funding that we received, we would not have been able to survive as young social business!”

Pivoting the business during Covid-19 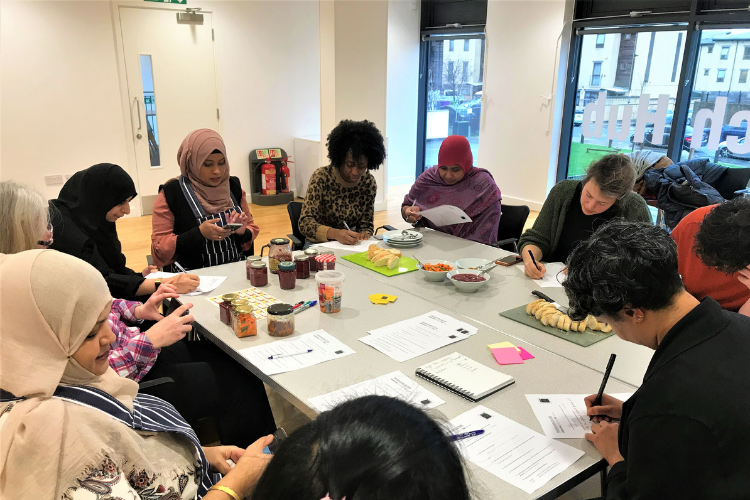 In March 2020, after delivering their first public workshop, Preservation Culture had to shut down their activities after the world was swept into lockdown caused by Covid-19. This led to an obstacle for Preservation Culture where their facilitators – women from the local London community, were unable to connect because they had to be involved with home-schooling and childcare. During the pandemic, Preservation Culture pivoted towards digital engagement, while in-person workshops could not take place. They have employed their facilitators to create food preservation recipes and share them on social media platforms, to keep connected with one another over their joy of cooking.

Preservation Culture have not only continued to support women during the Covid-19 pandemic, but they have also continued their mission to reduce household food waste. Their focus has been on preserving perfectly-edible food that is often thrown away, as an astonishing three-quarters of household food waste in the UK falls within this category. This equates to 15 billion pounds of perfectly uneaten food going to waste each year!

To prevent perfectly-edible food from being wasted, they co-developed a DIY SPICE KIT with a home-based pickling expert from the local East London area. The DIY Spice Kits comprise of three delicious spice mixes which are designed to be simple, easy-to-use, and versatile and are made to be used with the topmost wasted fruit and vegetables in UK households. The spice kits can be used to create tasty pickles, preserves and chutneys with leftover fruit and vegetables, that would otherwise be thrown away.

They have currently launched 3 DIY Spice Kits, ‘Veggie Queen’, ‘Pickle-me-up’ and ‘Fruit’s best friend’, that are either sweet-flavoured or spicy. They have been encouraging families in lockdown to come together and reduce their food waste footprint by using their spice mixes and sharing their creations on social media. During such abnormal times, Preservation Culture want food preservation to become the norm. Co-Founder Rabeea Arif explains,

“We want to create more awareness about cultural food preservation; what it means and what are the different ways food can be preserved to have a longer life. We want the concept of food preservation to become the norm, therefore we try and keep our messaging simple, fun, and easy-on-the-tongue.” 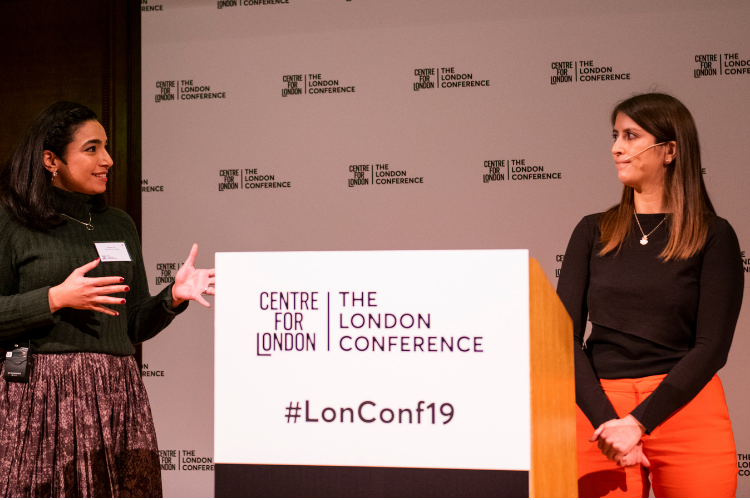 Co-Founders Rabeea Arif (left) and Angela Tolliday (right) presenting their work at The London Conference in 2019.

Preservation Culture want women to feel empowered to share their knowledge and be part of the change that it needed to improve our food systems. For instance, the UK is home to a plethora of cultures and nationalities, which they believe is an opportunity for different food practices and customs to be shared and celebrated. They also believe that the rise of convenience foods and food-delivery services has led to generations of people who do not have essential cooking skills or confidence in the kitchen. Recipes are no longer shared from generation-to-generation or amongst communities. However, people can learn from others in their community who have amazing culinary skills and knowledge to share.

As such, Preservation Culture’s DIY Spice Kits encourage people to enjoy spending time cooking in the kitchen once more and create recipes with different spice mixes that can be shared with local communities. In this sharing process, households can encourage one another to use the spice mixes to create preserves that reduce the amount of food they waste, to contribute to sustainable food consumption habits that is needed on a mass scale.

Finally, Co-Founders Rabeea, Angela and Magdalena believe that it’s important for women to support one another in their business ventures, no matter what sector or industry they operate in. Rabeea Arif advises her fellow female business owners,

‘‘Surround yourself with allies! Right from the moment when we first posted on social media about Preservation Culture, we have had immense support and encouragement from fellow female entrepreneurs. If you build a network of allies with similar values, you will be able to learn so much from their experiences, find support when you’ve hit a dead-end, and discover opportunities to collaborate.”

Preservation Culture demonstrate that empowering women can lead to real change. In their case, we applaud them for not only supporting women through employment opportunities, but by encouraging more people to take to their kitchen once more and reduce their food waste footprint in the process!

Los Salvacomidas is back! 2nd edition of the programme that thrives for zero waste and healthy eating children

June 14, 2022
regional news
In order to build a resilient and sustainable agrifood system, we need to work together to understand the challenges and opportunities faced by stakeholders from across the whole food value chain.
Continue reading